I’m so sick of seeing early polls, like this from Zogby:

His margins of advantage range from a 4 percent edge over Arizona Sen. John McCain and a 5 percent edge over Arkansas’ Mike Huckabee to an 18 percentage point lead over Mitt Romney of Massachusetts, the survey shows. Against New York’s Rudy Giuliani he leads by 9%, and against Fred Thompson of Tennessee he holds a 16 point edge.

Remember the 2000 election? Bush was ahead of Gore from practically 1998 until the eve of the election, and still….

“Study: Sex Education Works to Delay Intercourse.” The only thing that makes me doubt it is that Fox reported it.

[Jamie Lynn] Spears, who turned 16 on April 4 and says she is 12 weeks into her pregnancy, told the magazine she plans to raise her child in Louisiana, “so it can have a normal family life.”

…of eating possum and shagging sheep?

Jamie Leigh Jones, now 23, said that she was gang raped inside the Baghdad Green Zone in July 2005 while she was working for the Halliburton subsidiary KBR Inc, which has support contracts with the US military.

Jones’ KBR contract however included a clause which prevents her from suing her employer, Poe said, which will likely force her into arbitration, which he described as “a privatised justice system with no public record, no discovery and no meaningful appeal”.

There are many laws that the Department of Justice (DOJ) “can enforce with respect to contractors who commit crimes abroad, but it chooses not to”, Democrat Robert Scott said.

The DOJ “seems to be taking action with respect to enforcement of criminal laws in Iraq only when it is forced to do something by embarrassing media coverage,” he added.

Mr. Romney didn’t fight his church’s institutionalized apartheid, whatever his private misgivings, because that’s his character. Though he is trying to sell himself as a leader, he is actually a follower and a panderer, as confirmed by his flip-flops on nearly every issue.

It’s nice that columnists have to do the job of the newsmedia nowadays. This, really, is just one more way that Mitt Romney is a bigot who wouldn’t stand a chance on the ticket of a major party in a civilized country.

(By “institutionalized apartheid,” Rich is referring to the fact that the Church of Jesus F. Christ of Latter-Day Saints institutionalized racism until the late ’70s. Just one more bit of immutable wisdom that, in retrospect, didn’t seem like such a good idea.)

Of course, if anybody wants to stop illegal immigration, it’d be easy: just raise the minimum wage exorbitantly for illegal immigrants. That would punish the employers who hire them sufficiently so they won’t be hired. Then, when such workers get hired under the table anyway, enforce it when employees come to the authorities and demand their pay. Illegal immigrants would be doing the policing for the government. The jobs would dry up, and the problem would be negligible.

Of course, concern about illegal immigration isn’t rooted in common sense or concern for American workers, no matter what anyone claims. The root cause is racism, jingoism, xenophobia, ignorance, and stupidity. 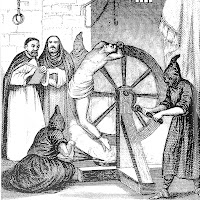 Ah, religious freedom! My favorite subject. Here’s to Mitt Romney, and all others who cure diseases with heavy doses of poison:

“Freedom requires religion, just as religion requires freedom. Freedom opens the windows of the soul so that man can discover his most profound beliefs and commune with God. Freedom and religion endure together, or perish alone,” he said.

This statement has some interesting implications. First of all, God is perishable? I guess the Catholics would agree. And then, who wouldn’t, as long as you have the correct religion?

Second, would Mitt Romney ban atheism? But permit worship of Cthulhu or the Spaghetti Monster (not to say they’re all that different)? Curious indeed: this would be the first time in American history, I think, where not believing something would be against the law.

Third, and most revealing, we can conclude that Mitt Romney is more batshit nuts than I thought. He communes with God? Is it a two-way conversation? If so, Mitt belongs in Bellevue, not the White House.

Mitt Romney is a bigot. It’s time for people to stop electing charlatans, like Romney and Bush, who play lip service to belief in God, while doing all they can to hurt the public. If you aren’t going to make it easier for the poor and middle class to send their children to a good school, you’re not “pro-family.” If you’re driving up the costs of healthcare for those who can least afford it, you’re not “pro-life.” And, if there is a God, believing in “Him” doesn’t make you any less of an asshole.

Romney allows no place in the United States for atheists. He opines that, “Freedom requires religion just as religion requires freedom.” Yet secular Sweden is free while religious Iran is not. Buddhism, among other great Oriental religions, is forgotten.

He shows a Wikipedia-level appreciation of other religions, admiring “the commitment to frequent prayer of the Muslims” and “the ancient traditions of the Jews.” These vapid nostrums suggest his innermost conviction of America’s true faith. A devout Christian vision emerges of a U.S. society that is in fact increasingly diverse.

Jefferson’s “wall of separation” must be restored if those who would destroy the West’s Enlightenment values are to be defeated.